Inspired by Those Unlike Us

After George Zimmerman was acquitted at his murder trial for killing Trayvon Martin, Alicia posted on Facebook, “I continue to be surprised at how little Black lives matter… Our lives matter.” Patrisse Cullors then shared that posting, adding the hashtag #BlackLivesMatter, and a slogan was born.  But she was an activist before that time as well as after.  Garza’s own life, raised by an African American single mother and, later, a Jewish stepfather, was an experience of racial and religious differences.  Her book, “The Purpose of Power,” includes a call to build movements and bases “larger than the people we feel comfortable with.” 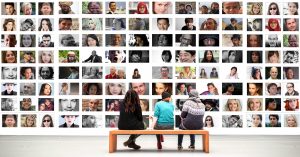 I could use similar language for what we are hoping to continue to build here at the Society for Ethical Culture.  Sure, many who join us do so initially because they don’t feel comfortable in traditional religious congregations, and they still want a community that calls us to be our best selves, to live ethically and in greater harmony with the universe — to seek justice, love mercy, and walk humbly, whether or not we believe in traditional metaphysical concepts like a God.

At the same time, it is the challenge of our differences which keeps us learning.  Within a community or a movement, that will create tensions and differences.  If those are papered over with an appearance of agreement and sameness, that community or movement will not grow, either in numbers or in vitality and vision.

It is important to be in a place where there is a common commitment to that diversity.  It’s also true that for many of us, we have family or friends who disagree.  Garza also said, “When people say … ‘I don’t talk to my family because they’re racists,’ I’m like, ‘No, no, no; that’s exactly who you need to be talking to.”

As we begin the RYSEC emerging process this fall, returning to a mixture of in-person (when that’s safe) and online gathering, I recommend we pay attention to voices that are expressing differences, and consider what we can learn from them, and what we have to bring.

Two of the opportunities for this will be coming soon.  The American Ethical Union (AEU), our national association, will be sponsoring another round of book discussions, and I’ll be leading some of those — I’d love to see RYSEC members, friends, and neighbors sign up.  And, I’ll be reprising February’s workshop for those who are already persuaded that America has a racism problem (even a crisis), a social hierarchy with white people assumed to be on the top.  That workshop will specifically address how we can have productive conversations with those who are convinced that such racism no longer is or never was a problem.

Why is there a focus within RYSEC and within the AEU on racial justice?  Because at the core, our identity is about human worth and human connection, and, in more wise words we can hear from Alicia Garza, “We want to see a world where black lives matter in order for us to get to a world where all of our humanity is respected.”