Holidays at the Turning of the Year

At the time of the turning of the year, a question I often get asked by people outside of Ethical Culture is, “What kind of holidays does an Ethical Society celebrate?” Or, sometimes more specifically, “What do you do about Christmas?” When I testified before a judge in Illinois in December 1995,  justifying the Chicago Society’s standing as a religious organization, the judge asked, “Do you allow your members to celebrate Christmas?” They tempted me to answer, “Just try to stop an Ethical Culturist from doing something they want to do!” More seriously, the question is: what kinds of rituals and ceremonies are possible in a group that doesn’t share a common belief system? 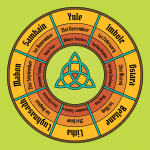 Our official stance as an Ethical Society is that Christmas, Hanukkah, Ramadan, Divali, Easter, Passover, Imbolc, Yule, or other such holidays are matters of personal or family celebration, tied as much to one’s cultural background as to traditional religious beliefs, and are “allowed”—but that together, we celebrate our common ground.

At the turning of the year, we have a Winter Festival, recalling that most cultures in the Northern Hemisphere saw fit to celebrate in some way the coming of light during the darkest season of the year. Values that we celebrate are those that are common to many other traditions, but are owned by no one people, no one faith, no one culture—values like peace on earth, hope in the midst of oppression and defeat, joy at the beauty of our world and the company of other people, generosity to family and strangers, community coming together for fellowship and for service.

My parents and half my grandparents left Christianity long before I was born, to become humanists. But being Scandinavian in heritage, they celebrated Yule, recalling that the so-called Christmas tree was originally part of pagan tradition at the winter solstice. The tomtes, or elves, held a place of honor at the winter holidays. I still am more Swedish and Norwegian in December than at any other time of the year.

Other Ethical Society members consider themselves Jewish, and at home will celebrate Hanukkah during this season, a holiday which has for centuries represented a kind of struggle against assimilation into the larger culture’s religious practices, a sentiment shared by many who aren’t Jewish in today’s America where starting in early November, shopping malls blare with songs about “Jesus the newborn King.”

With school breaks at Christmas, it’s often convenient for families to travel to see each other. Many of our members are either out of town, or hosting out-of-town visitors. We have found it most convenient to close occasionally during the holiday season, at least on the Sunday after Thanksgiving and the Sunday between Christmas and New Year’s.  But on a Sunday before that latter break, we celebrate our Winter Festival together.  We encourage all to come for this intergenerational celebration of deeply held values.

There’s something about the coming of winter and the turning of the year that requires of us as humans that we gather in community. Our children need these traditions, and adults need them, too,  from the Stone Salad celebration of community and sharing, just before the American Thanksgiving, to our Winter Festival, to the Spring Festival as we welcome the next change of season.

Yes, Ethical Culturists are “allowed” to celebrate Christmas and Hanukkah and Yule and other religious holidays — as personal or family holidays, for we are not only members of an Ethical Society community, but part of families and cultures that are also worth honoring. Together as an Ethical Society, we honor community, we honor justice, we honor hope, joy and light in the depths of winter, and we honor growth and change at the coming of spring. Will you be there to help build and evolve those traditions, for ourselves and a new generation?