For many years, this project collected non-perishable items at the Meeting House, distributing them from the Church of the Mediator. The Society welcomed food donations Monday through Friday from 10:00 am to 4:00 pm and on Sundays from 12:30 to 1:00 pm.

Note that these in-person activities are on HOLD during the COVID-19 pandemic precautions.  See Food Pantry Donations for an alternative for food donations.

With the current economic situation, your contributions are needed more urgently than ever. The project is still distributing assistance to some who are in need, in different forms. 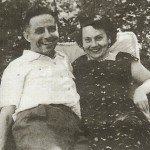 Dr. Mathilda Furman, a longtime member of the Society, affectionately known as “Mattie”, founded the Kingsbridge Riverdale Marble Hill Food & Hunger Project, Inc. (KRMH) in February, 1980. The impetus for the hunger project came from hearing a platform on hunger at the Riverdale Yonkers Society for Ethical Culture. The talk also made her think of an 8-year old boy diagnosed with malnutrition that week at Montefiore Hospital, where Dr. Furman worked.

The project began in 1980 after research revealed a surprising number of hungry people in our own and neighboring communities. Although Riverdale was seen as “affluent”, the project found many who desperately needed help at one time or another. Soon thereafter, she launched her program, and enlisted the support of rabbis, priests or anybody who would listen. This became an interfaith not-for-profit organization dedicated to alleviating the problem of hunger right here in our communities.

Even after she was confined to a wheelchair in 1993, Dr. Furman insisted that volunteers gather at her apartment on West 240th Street in Riverdale to package food for the holidays so she could supervise and be certain that such special requirements as food for diabetics, young children and those who kept kosher would be fulfilled. Then-Society members Helen Auerbach, Annie Elias, Marianne Cohen, Yvonne Dolly and Toby Kirsh served selflessly as volunteers for many years.

A biochemist, Dr. Furman was of Turkish and Sephardic background and was educated in Istanbul, Paris and New York, and practiced at Albert Einstein Medical Center. In 2000 she received a proclamation from the New York State Legislature, as well as a Certificate of Merit from the Bronx Borough President for her dedicated work.

Dr. Furman passed away at 84 on December 3, 2000, at Sound Shore Hospital in New Rochelle after a long illness. Former Riverdale Temple Rabbi Stephen D. Franklin officiated at the funeral service on December 6, and our former Leader Curt Collier participated. Interment followed at Mount Pleasant Cemetery in Hawthorne. She left behind her son, Roger.