Doing Our Part for Democracy

Democracy means rule of the people, where a majority can take action, while protecting the rights of vulnerable minorities.  But democracy doesn’t work if the people don’t speak up. 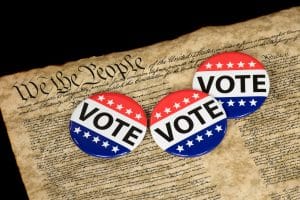 There’s another election coming up this month in New York City.  I urge you, if you are an eligible voter in the city, to be sure to inform yourself and to exercise your right to vote.  We’ve co-sponsored some non-partisan candidate forums this spring in order to try to increase the information you have, to vote wisely.  Before ranked-choice voting, voting might have been a struggle to figure out the  risks of voting your values vs. voting pragmatically; ranked-choice voting means it’s easier to risk voting your values without worrying you’re “throwing away a vote.”

Late last year through early January, RYSEC members turned out in good numbers in efforts to send postcards, texts, and other notices to potential voters.  That’s another good way of shoring up fragile democracy.  We’ll have that opportunity again, to offset ways in which voting might become more difficult in some states.

Another good way to reinforce democracy is to be in touch with your elected representatives.  A little more than four years ago, many of us suddenly got into the habit of regularly calling our government representatives.  Democracy remains fragile, and it’s still important to keep calling.  Maybe no longer 5 calls a day (and who kept that up for four years?), but consider setting a goal for yourself of one call a week now, and again when there’s a major issue.

Calls are much more effective than social media, email, or snail mail.  Signing online petitions may have a small effect, but they’re mainly for being one in a very large number, and they do usually get you on a mailing list.

I’ve updated the Guide to Calling Your Representatives, first published in February, 2017, on this site.

Your voice is important, and calling your representatives magnifies your vote.  We learned that lesson in 2017 and beyond, and it’s a practice well worth continuing.

Making Some Beauty Together