“Imagination is a danger thus every totalitarian regime is frightened of the artist. It is the vocation of the prophet to keep alive the ministry of imagination to keep on conjuring and proposing alternative futures to the single one the king wants to urge as the only thinkable one.” ~ Walter Brueggemann

One of Walter Brueggemann’s books was required for a course I took at the University of Chicago on the Hebrew Scriptures.  Brueggemann, a Protestant Biblical scholar and theologian, stood for religion as providing a alternative narrative to forces of nationalism, militarism, and consumerism.

While I do not share his Christian faith, I do share his basic commitment to the idea that in order to make change, we need counter-narratives to “this is how it is and how it always shall be.” For him, it was the imagination of the church, and the Hebrew prophets.  For Brueggemann and many scholars, the meaning of “prophet” is not one who is a fortune-teller who predicts the future, but one who critiques society in the name of a better vision for how we could live.

We are living right now in a time where history could move in very different ways.  We are now learning how many who invaded the Capitol in early January intended it to be a bloodbath of executions, and those seeking to overthrow the Constitutional process of counting Electoral votes — and indeed, thereby overthrowing the votes of 81 million people — were so confident of their success that they did little to hide their identities. 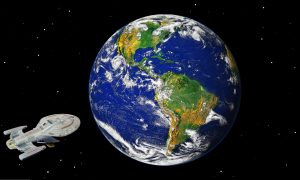 Image by Tumisu from Pixabay

For many in my generation and since, the Star Trek stories of a different way of organizing people served as that prophetic imagination. The Star Trek universe was not, of course, perfect.  There was a whole lot of “othering” going on (even though those “others” usually also got humanized along the way).

Science fiction, in general, can serve that purpose of an alternative narrative.  This seems the perfect time, for instance, to read or re-read Octavia Butler’s Parable of the Sower.  or Ursula LeGuin’s short story, “The Ones Who Walk Away from Omelas.”  Or, despite my reluctance to add any enrichment to Orson Scott Card (for his terrible positions on many contemporary social issues), there are few books that make us think through the dangers of “othering” and militarism than Card’s book, Ender’s Game.

It was back when I was in college, eons ago, that I read an essay by Ursula LeGuin who said that all science fiction is really about ethics.  Star Trek’s “others” like the Klingons, Ferengi, and Cardassians are enemy aliens (mostly), but they can also be seen as representing very human characteristics, and interactions with them seen as our own social and personal struggles with those characteristics.

It’s worth thinking about what alternative narratives we’re each exploring and what ethical values they embody.