A Lifetime of Becoming

This week, I thought I’d share some personal reflections on “becoming.” Many of you will have your own stories, and maybe (since May is “story” month at RYSEC) you might also consider putting your story of becoming into writing.  Or digital words.

You can become anything you want to be, if you put your mind to it. 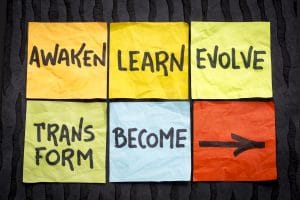 I heard that a gazillion times in my childhood.  My parents really meant it. Or rather my mother did.  My mother said it out loud, my father supported my various ventures more silently.  I would only hear about his support via others who’d tell me what he’d said about me, to them.  Sadly, my mother didn’t see much of my journey.  Her own journey took her back to finish college at 58, and she died the year she would have graduated, at 60.

When I was 7, I wanted to be a nurse. Somewhere around 7th grade, I realized I didn’t want to be around blood, and so I decided to be a teacher.  I’d struggled with arithmetic when I was in grade school, and then when it turned to math found that exciting and rather easy — so I wanted to be a math teacher, to give students the opportunity to find the fun and excitement that I had found.  I remember just after my sophomore year in high school, during a summer course to learn to write computer programs, going to a lecture sponsored for those in the course. The speaker laid out all sorts of other interesting ideas for careers for math majors, and ended with a throwaway line, directed right at the girls sitting in the third row, including me:  “And you girls can be teachers.”

I didn’t think much about it at the time, since I wanted to be a teacher.  But it must have somehow triggered some thoughts, because that statement stayed with me.  As I got to college, where I started as a math major, it slowly dawned on me: culture had put some really strong limits on my “becoming.” The boys I was in classes with had many more varied dreams of what they’d do with the math we were all good at.  That slow sunrise got me thinking even more broadly: what and who did I want to be?

I realized it was more about the teaching than the math, more about the human relationships.  My explorations were cut short with some family struggles where I ended up leaving college, and working at the first office clerking job I could get.  Even then, culture put limits on that “becoming.”  I went to a job placement firm for help in changing jobs.  As I was sitting with the advisor, after being sent to interviews for boring jobs typing certificates of deposits for banks or being a secretary for an ad agency (where the interviewer made clear that the “girls” were expected on Fridays to go out to the bars with the guys who were their bosses), another advisor called across the room, “Does anyone have candidates interested in computer programming?”  I eagerly told my counselor that I’d had that summer course — and off I went, into my first computer programming job.

Even there, I ended up in the training department after a few years, because again, I was more interested in the human side.  And from there, management.

I had had a parallel interest, from high school on, in social justice activism and politics.  In my 20s I found myself inspired by talks by Rosemary Ruether and Arthur Waskow to find a connection between progressive religion and progressive social justice activism, seeking to connect to deeper values than just the cause of the year.  That set of interests, and working for a Fortune 500 company in a management position, gradually weren’t working well for me, and I went on the next stage of my becoming more fully myself.   First to applying technology to producing educational videos (a skill I’ve been really glad I had experience with during this last year!), though that was not quite “it” yet.

And that led me to theological school and to the Unitarian Universalist ministry, which in turn led me to finding Ethical Culture where my particular values and interests seemed to be most applicable.  And after working with two Unitarian Universalist congregations and three other Ethical Societies, led me here to the Riverdale-Yonkers Society for Ethical Culture.  My father saw me well on the way on that journey, and I am sure my mother would love where I ended up.

I am still becoming, and so is this Society.  I think one reason we’re a pretty good fit together is exactly because of that.  I came at a time where the Society was considering; what would it become?  And as we emerge from this pandemic time, when we had to suddenly shift gears and become a different kind of community for a while, we’re still thinking about that and beginning to make plans: what kind of community will we be for the future?  What does the future most need?  Can we be a connecting place for the many who don’t find a fit with traditional religious congregations, but who are looking for something beyond that — and yet also don’t fit with just social activism or social group affiliations.

It’s not really “we can become anything we want to be.”  More, “we can work on becoming who we really are,”  learning more and more who and what that is by the experience of each stage of the journey.